In the Retrospec series, I take a retrospective look at my favorite animes. I’ll be going through a work, episode by episode, pointing out composition and plot elements that I think contribute to its brilliance – all in the name of better understanding the work and what aspects of its craftsmanship we can appreciate and recognize in other works.

I recently wrapped up an entry on the 3 episode OVA Gunsmith Cats.

FLCL is the acclaimed 2001 comedic action Sci-Fi anime from Studio Gainax and Production I.G. It was written by Yoji Enokido and Kazuya Tsurumaki, who also directed it.

FLCL follows Naota Nandaba as he is drawn into Haruko Haruhara’s search for the pirate king, Atomsk, when she tries to use the former as a portal to draw the out the latter. The zany adventure puts them at odds with Medical Mechanica and even draws the attention of the Bureau of Interstellar Immigration. Full of fast cuts and bursting at the seams with references to japanese and american properties alike, it’s one of those highly memorable and highly polarizing animes notorious for being harder to comprehend than any show has the right to be.

Everyone wants to BE grown up, but no one wants to GROW up. You see, growing up can be a slog of monotony, hard lessons and bemusement. FLCL, at its core, is a coming of age story, but it’s one shone through a narrative prism. The mellow, human details of growing up get their own plot threads in each episode, but all of the passion and gravity of experiencing them is channeled into the overarching Atomsk plot that’s always in the forefront. I wouldn’t go so far as to say that the Atomsk plot doesn’t happen or is purely symbolic, but many of the triumphs and conflicts in it do parallel the those in Naota’s personal life. In essence, many of the characters’ greatest challenges are moreso themselves than any monstrosity they meet along the way and success starts with a character making peace with their circumstances and themselves. 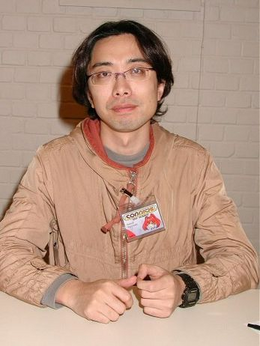 Kazuya Tsurumaki is a long time animator at Gainax that has worked under extensive tutelage of the highly revered Hideaki Anno. He first served as animation director for the TV series Nadia: The Secret of Blue Water in 1990 – both the episodes themselves and the omake segments that accompany them. He was also the producer for the feature film. He would then go on to work as assistant director under Hideaki for Neon Genesis Evangelion, even directing episode 25. Prior to FLCL, he picked up directorial duties for the TV series His and Her Circumstances in Anno’s absence.

One of the most memorable aspects of the series, besides its visuals, is the stellar soundtrack created almost entirely by The Pillows – a Japanese Alt Rock band. Headed by Sawao Yamanaka, Yoshiaki Manabe and Shinichirou Sato (and formerly Kenj Ueda), The Pillows were formed when Kenji Ueda and Shinichiro Sato, former members of Kenzi & The Trips, teamed up with The Coin Locker Babies vocalist Sawao Yamanaka and Persia guitarist Yoshiaki Manabe in 1989. The band name was inspired by an English Post-Punk compilation album named Pillows & Prayers. Their first EPs, Pantomine and 90’s My Life, were released a year later. Their first LP, Moongold, was released in June 1991. 1992 saw the release of their second LP, White Incarnation, creative differences and the departure of Kenji Ueda. Sawao Yamanaka would take over leadership duties, recruiting Tatsuya Kashima as a guest bassist. This and signing on with King Records, would carry them into the second half of the 90’s and the body of work that many fans of FLCL know them for.

The Pillows had made use of many styles throughout their careers, ranging from electro pop and Jazz fusion to Reggae and Pop Funk. This continued while folding in influences from other alt rock bands such as The Beatles, Weezer and The Pixies. Three of their 90’s albums that show the greatest amount of said influence, Little Busters, Runner’s High and Happy Bivouac, caught Studio Gainax’s eye. In addition to Gainax licensing the aforementioned albums, the band also created two additional songs, Ride on Shooting Star and I think I Can, for FLCL.

OP (or lack thereof) and ED

FLCL has no dedicated opening sequence, instead electing for cold opens with some tracks from The Pillows (“One Life”, “Instant Music”, “Happy Bivouac”, “Runners High” and “Carnival”). Oddly fitting as childhood itself begins with no fanfare and you’re lucky if it ends with one.

On that note, while there isn’t an OP, there is an ending segment – and a rather enjoyable one at that. Set to The Pillows’s jamming tune “Ride On Shooting Star”, it distills all of the wackiness of the show’s resident weirdness magnet, Haruko, into a two and half minute joyride.

The ED starts with Haruko suiting up for a ride on her Vespa before proceeding to do just that in the most Haruko way possible. If the preceding episode hadn’t made it clear, this segment ought to – Haruko is an eccentric soul and she’s out to have a good time. What can only be described as “Anime BMX’ing on a Vespa”, she winds and twists her beloved scooter all over the screen (on one wheel, nonetheless) with reckless abandon. Needless to say, this isn’t without risk and Haruko bites it a couple times. It’s at this point that we see another side of Haruko: her inability to handle failure or frustration in a constructive manner. When her Vespa refuses to start, Haruko pouts for a bit and proceeds to beat the poor thing with a bat before storming off.

At this point, things get rather interesting as the Vespa silently expresses what one would likely assume to be exasperation at Haruko’s antics before righting itself and strolling off.

That’s right. The FLCL ending made the Vespa it’s own character. At this point we get to see the beloved Vespa ride all around town, and even making a friend, on its own for the remainder of the ED.

Some of my favorite sequences are the ones that come during the build up for the chorus and the ending riff. They’re a quick sequence of disparate glamour shots. The first two (which come before the chorus) are for Haruko and are a bunch of weirdly colored shots of Haruko in either suggestive or funny poses or outfits. When the ED gets around to her Vespa, it’s a rapid fire barrage of stills of an actual Vespa.

And all of this is done with montages, fast cuts, partial silhouettes and a mix of stop-motion and drawn animation. It makes for a dense, kinetic sequence that’s a blast to watch – especially with the upbeat, addictive tune.

So What Should We Take From This?

No Need For OP – There isn’t an opening credits theme. It may be a little odd, but there isn’t any hard and fast rule that says you HAVE to have one, either. Interestingly, this oddity is likely intentional as the director said that, in an attempt to break the rules of anime,  they were patterning the show in a similar style to that of a Japanese commercial: “short, but dense”. Commercials don’t open to much fanfare, but they deliver the spectacle of their content quickly and cap the whole experience with a memorable tag line or branding jingle to add some sort of cohesion between them.

So why do it? Framing….or rather the lack thereof. The point of an OP is to prime the audience for the overall story that the following content is a part of. The format of the show, and any changes thereof, are for framing how the content should be considered in reference to the bigger picture. It’s not uncommon for shows to have cold openings for further episode-specific priming or temporarily postpone the opening until the end of the episode or even one there after (e.g RWBY) for similar effect. Some shows, such as Monster Musume, may even switch the ending and opening themes at times to highlight different themes or characters.

In FLCL’s case, no OP means no primer for the series. You are going into each episode somewhat blind to the greater picture and, much like a painting with no title, your experience will govern what you think of it more than any preconceived notions fostered to you by an opening credits sequence. I could spend some more time harping on how this mirrors reality seeing as in real life you rarely get a proper primer for any segment of your life, especially childhood. But, I think Hajime Ichinose said it best: “Most of life is unexpected”.

Next time, we move on to episode 1